Despite the overwhelming evidence correlating traditional family life with personal health and prosperity, Americans are increasingly casting aside this vital social institution.

Nebraska Senator Ben Sasse appeared on HBO’s “Real Time with Bill Maher” show to promote his new book, “The Vanishing American Adult: Our Coming of Age Crisis — And How To Build a Culture of Self Reliance.”

Surely Sasse didn’t expect this routine publicity spot for his book to turn into a media storm. But thanks to Bill Maher’s infamous and irreverent mouth, this is what happened.

Maher, of course, makes his living being irreverent.

But now he has discovered that even a rich left-wing provocateur has lines he can’t cross. And using the classic word of black denigration — the N-word — is one of them.

Now he has apologized — surely not out of any personal remorse but out of career damage control. Whether he will pay a price for his casual exploitation of the pain of others remains to be seen. Regardless, we should ask if there is something to learn here.

Maher did Senator Sasse a kind of favor. His behavior was advertisement for the relevance of Sasse’s book.

Sasse discusses in this book what he sees as a trend in America toward “perpetual adolescence” — a deferral of the transition from child to adult. 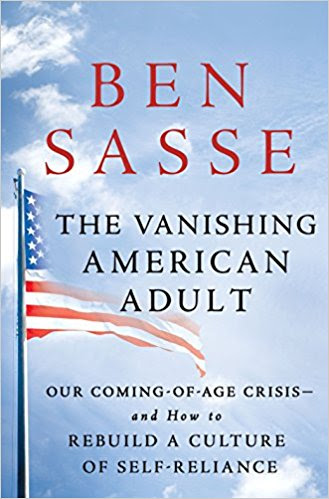 It’s about taking responsibility for one’s life and, in an even broader sense, for the challenge of living.

We come into this world as egoists. Everything revolves around us. Growing up involves discovering that the world is about more than me, that there are others, and that we are all part of something greater than ourselves.

But this is really exactly the opposite frame of mind that our society today supports.

Instead, the values our culture tends to celebrate and encourage are those of the perpetual adolescence that Ben Sasse talks about.

Everything is about me — my wants, my claims, my rights.

Despite the overwhelming evidence correlating traditional family life with personal health and prosperity, Americans are increasingly casting aside this vital social institution. Why? Because along with it comes responsibility, caring about others as well as oneself, and caring about the future as well as the present. Taking on the responsibility of marriage and family means transitioning to becoming an adult.

This transition also means appreciating and recognizing that there is knowledge I do not have, and that it is important to learn. This builds humility rather than arrogance.

Which gets back to Bill Maher. It is no accident that in a 2016 Gallup poll only 32 percent of Americans said they have “a great deal” or “a fair amount” of trust in the media. In a society without an appreciation for lifelong learning, where young people arrive at universities feeling they already have enough wisdom, media is going to be about entertainment, not knowledge.

So our media stars are provocateurs such as Maher, whose objective is to violate sensibilities, because this builds audience. He doesn’t care about knowledge. He also doesn’t care about respect, and what was once taught as the Golden Rule — to treat others as you wish to be treated. This is adult behavior.

So, Bill Maher helped Ben Sasse make his case about “The Vanishing American Adult” by showing how he makes a handsome living in a society that rewards perpetual adolescence.

Of course, Bill Maher is far from alone. Increasingly, all our media is about provocation rather than knowledge.

Meanwhile, Senator Ben Sasse has an important message for the nation. If we want a future, we need to grow up.